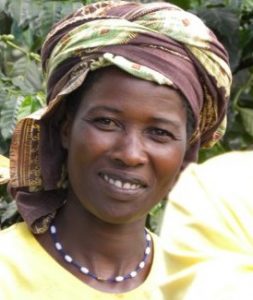 Enthusiastic female and male farmers of all age groups improved quality and quantity of coffee, gender changes in relation to increased joint land ownership, joint planning and decision making, better division of both productive as well as household labour. Farmers scaled up the methodology through their own networks. How? Read here!

I  use the Gender Action Learning Systems (GALS), developed by and copyright Linda Mayoux.

GALS aims to provide a way of mainstreaming gender and generational empowerment as a sustainable longer-term business investment in supply chain expansion and strengthening. Sustainability is planned and monitored from the beginning, with short-term targets and activities as well as the long-term vision. GALS focuses specifically on developing new visions for relationships between women and men as equal human beings and implementing changes in gender inequalities in resources and power.

“Gender is simple: it means women and men treating each other like equal human beings with equal human rights and social responsibilities”  Linda Mayoux

Using GALS as a long-term business investment strategy to increase the skills and resources of women and men with whom they work, they will be able to generate increased profits and outreach. This means that they can also be the motors for widespread change in gender relations as a win-win strategy to make a significant contribution to national development and the global economy.

WHY GENDER AND GENERATIONAL EMPOWERMENT?

Gender inequalities in power and resources negatively affect economic efficiency at all levels. Participatory analysis by men and women coffee farmers in Uganda, Kenya, and Tanzania using GALS tools have concluded that gender inequalities were not only a problem for women but a key cause of low productivity, low quality, and prices at the farm level.

Coffee is considered a “men’s crop”. Men control the land, the coffee trees, do (part of) the work,  earn the income from coffee, and often decide how to spend it. They receive technical training and know what prices they can get for the coffee. They are the leaders and member of producer organisations. 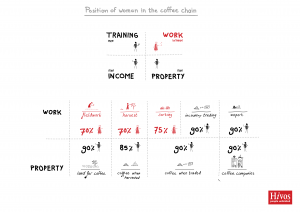 Women farmers of all ages play a crucial role in ensuring coffee volumes and quality performing an estimated 70% (in East Africa) and  40- 50 % (in Indonesia) of the work in cultivation and processing tasks like hulling alongside cultivation of food crops and unpaid household work. But they have traditionally been excluded from ownership of coffee land and control over coffee incomes.  They do not have access to training or relevant information on coffee. Women said that because their benefits from the work or any investments were limited, their motivation to produce/pick/process good quality was small.  Women who perform most of the work are often more interested in using their time and income for other crops and therefore neglect the coffee trees.

Young men also do not own or control the land use either and are discouraged from cultivating coffee due to low prices, and lack of ownership.

All of these factors contribute to a weak smallholder coffee sector, which lacks the dynamism to fulfill its potential as a valuable income stream to coffee farming families.

One factor that discourages companies from addressing gender issues is the perception that things cannot change and/or change is inevitably conflictual and/or requires some sort of ‘separate women’s social project’.

The experiences of champions who have used the GALS@scale methodology shows that change can happen quite quickly and this leads to improvements in coffee quality and quantity, intra-household – and intra-chain relations.

When still working with Hivos together with Linda Mayoux and a team of national consultants, I developed the Gender Action Learning for Sustainability at Scale (GALS@Scale) programme adapting the GALS methodology to the needs of private sector companies, large cooperatives, and governments.  Now I work as a consultant, using this methodology,  advising companies. I have been working on processes in Tanzania,  Kenya, and Uganda and I am presently involved in the process in Indonesia.

WHAT ARE THE BENEFITS?

Coffee farming households, including women-headed households and youth, have been able to implement improved coffee practices and significantly improve both quality and quantity. Farmers reduce early distress sales and can wait until coffee traders can offer them the best prices for best quality coffee. Bukonzo Joint Cooperative Union in Uganda was the first organisation to use the GALS approach. They have been able to change coffee in the area from one of the worst qualities in Uganda to one of the best through integrating GALS with other organic and Fair Trade practices. Bukonzo Joint has purchased their own processing and transport and are now exporting independently to Japan, US and elsewhere. In Kilimanjaro Tanzania, women and men farmers who had previously thought coffee unprofitable are now implementing improved practices. 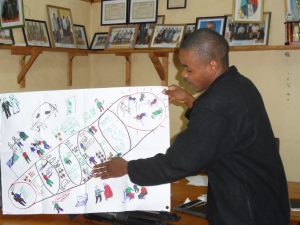 • GALS@scale promotes participatory and analytical skills at all levels as a means of visioning, planning and implementing change as individuals, families, communities and organisations.
. GALS@scale strengthens individual life and livelihood planning skills for women and men as a basis for mutual empowerment, joint decision-making, and land agreements, which has increased incomes and efficiency of the division of labour and reduced unproductive expenditure. This has made men as well as women happier and inspires youth and children to aim for a better future.
• GALS@scale has led to significant changes in gender inequalities leading to empowerment of women (including equality in decision-making and freedom from gender-based violence) and also empowerment of men through enabling them to change the many destructive dimensions of ‘normal masculine behaviour’ enforced through peer pressure and frustrations of life. Changes have come about for a significant number of people (40-60% in strong processes) in a relatively short time (1-6 months) as the basis for widespread longer-term change in other areas like property relations and political rights. Some changes are immediate as an ‘enlightenment’ on issues and ‘wrangles’ people had already been struggling with immediately after they have learned a tool. Other changes require changes at wider community and institutional levels and collective efforts over a longer period.
• GALS@scale has formed the basis for setting up of self- or locally-funded farmer groups where these did not exist.

Sustainable upscaling:
• Experience in Bukonzo Joint Cooperative Union and Hivos GALS@scale shows that the methodology can be financially sustainable after about one year as a significant contribution to improved quality, increased quantity and improved intrahousehold and chain relationships between stakeholders.
• GALS planning at organisational level has supported the continuation of cooperatives like Vuasu Union in Tanzania and started promotion of women in leadership.

FOR WHOM IS IT MEANT?

Individuals, households, communities, organisations, from producer organisations to companies of any size, as well as with government extension services, all can use GALS@scale.

WHERE HAS GALS@SCALE BEEN IMPLEMENTED?

In the coffee sector, GALS has been implemented in East Africa and recently started in Indonesia. The “mother”organisation of GALS is Bukonzo Joint Cooperative Union, a coffee farmers’organisation of more than 5000 members, which has  implemented GALS, and an earlier version of it, since early 2000.

Since 2013, Hivos together with ECOM have been implementing GALS@scale in Tanzania, Kenya, and Uganda, and started in Indonesia in 2016. I have designed and adviced the processes in Indonesia.

However, many more organisations are implementing GALS in many different countries, either in coffee or other sectors, as well as outside value chains, predominantly in Africa (Uganda, Kenya, Tanzania, Ethiopia, Burundi, Rwanda, Malawi, Mozambique, Sierra Leone, Nigeria, Ivory Coast), but also in Asia (Indonesia, Kyrgyzstan, Laos, Vietnam) as well as Latin America.  In a  forum organized by IFAD, Oxfam Novib, and Hivos in June 2016, where many practitioners came, the slogan was to go “from thousands to millions.”  It has become a movement.

HOW DOES IT WORK?

GALS@Scale uses inclusive and participatory processes and simple mapping and diagram tools for:

All GALS workshops and meetings aim to help people:
•   vision how their lives, families, and communities could be in a more gender equitable world
•    identify achievable steps to change that they can implement immediately and also over the longer term
•   develop participatory, listening and leadership skills
•   build confidence and creativity in visual communication, songs, and theatre
•   form new friendship networks within which women and men treat each other as equal human beings
•   develop facilitation skills to become champions of change in their households and communities

Look at  the ppt on Introduction GALSatScale